The Crew Module shown here was manufactured at Langley and had to be transported for completion to the Dryden Space Center, CA, and then onward to the White Sands Missile Range, NM for flight testing. CDK supplied the CLT systems, provided training to NASA operators, and assisted with technical support for C17 Aircraft loading operations. The CLT system was selected for this critical application because of its unique capabilities for handling, transport and aircraft loading.

The Orion Crew Module is part of NASA’s new Constellation program. It is a new crew exploration vehicle set to carry four crew members to lunar orbit and return to Earth after missions to the moon’s surface. The first crew modules will be used to test a crew escape system (using rocket motors and parachutes) during an abort flight test. This system would provide a safe escape route for astronauts in the event of a problem on the launch pad or during ascent into low earth orbit atop the Aries 1 rocket.

Kevin Mulligan of CDK with NASA and USAF personnel inside a C17 aircraft after a successful test loading. 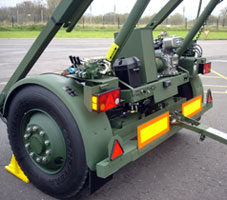